We’ve just come back from an excellent long weekend away in the lovely town of Moab, Utah, so strap in and get ready for some beautiful pictures! Barry & Margaret are visiting us from England, so we took the opportunity to show them one of our favorite places in the US.

Moab is at a similar altitude to Fort Collins, but is over the boarder and on the other side of the Rocky Mountains. It takes about six hours to drive over there, but luckily it’s a very scenic drive that takes us past several famous ski towns (including Vail, Breckenridge and Frisco) as well as many spectacular views. The town itself is quite remote and surrounded by amazing landscapes, most of which we managed to visit during this trip.

First things first though, on arrival we headed straight to lunch at one of our favorite locations – the spectacular Moab Brewery: 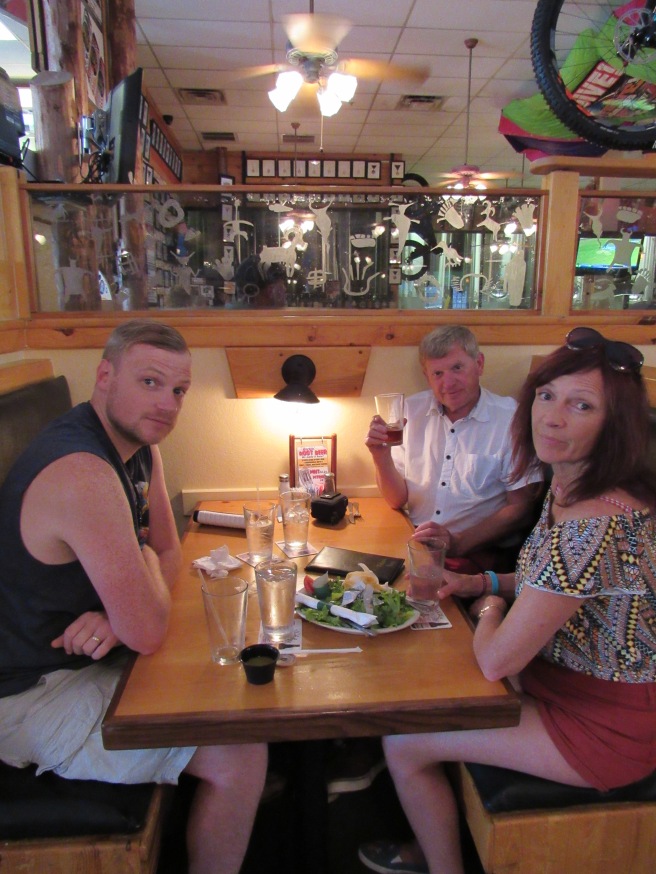 Very eccentric decorations, as well as delicious food and beer! As an extra bonus there is a signed Joe Biden (Obama’s vice president) picture on the wall from his visit here where he declares “this place rocks”.

After eating our tasty lunch and drinking several pints of ice water we headed over to the Arches National Park. We’ve visited it a few times before so apologies for the repetition, but hopefully our fancy new camera will give you some previously unseen views…

As always it’s very hard to capture the epic scale and the stunning colors, but alas I must try. Something that did give a glimpse of the scale was the crow helpfully sitting on top of the balancing rock… 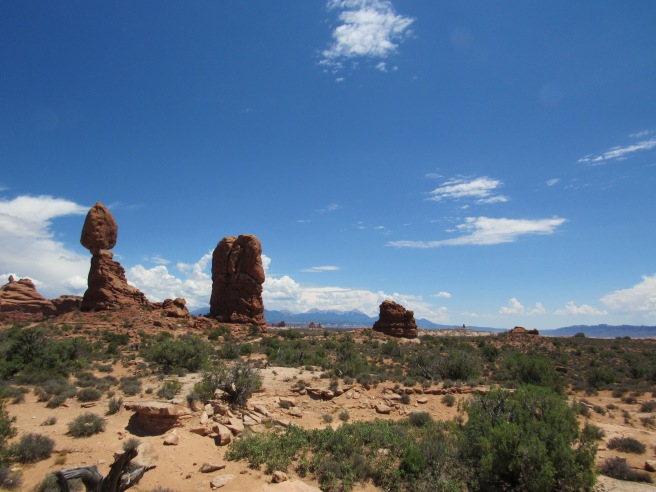 The balancing rock is the one to the left, so named because the top part of the rock seems to be very precariously balancing on the bottom. Can you see the crow?

So yes, if you like big red rocks this is the park for you!

After admiring the scenic rocks we drove further into the park for a hike. Unfortunately I was on antibiotics at the time so decided to have a sleep in the car rather than hike around in the 105oF heat, but Rob bravely carried on and kept taking pictures.

They hiked all the way over to the famous delicate Arch, and got some lovely shots! 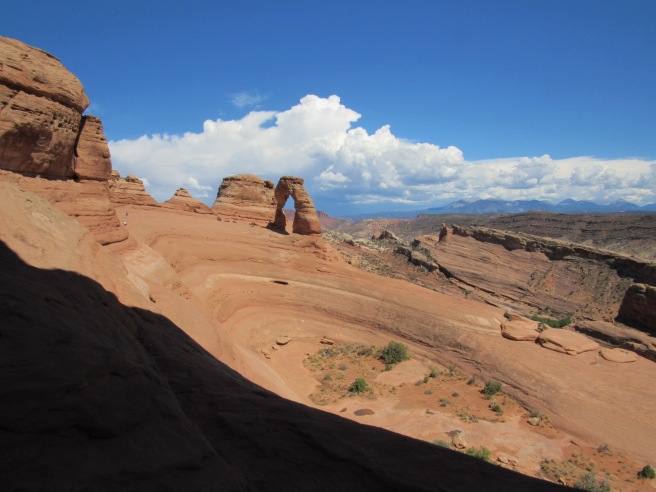 You can just see the La Sal mountains in the background, looking rather spectacular, as well as the big bowl in front of the arch itself. 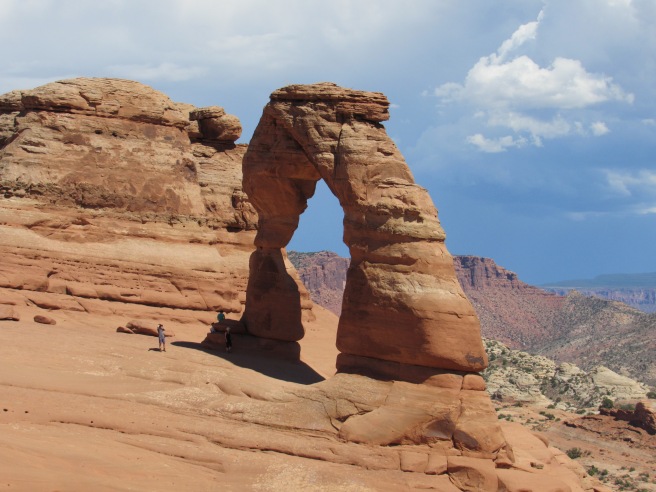 Stunning as always, with the blue skies and the red rocks.  The park itself is massive (almost 120 sq miles) and the views on the hike back to the car park continued to impress… 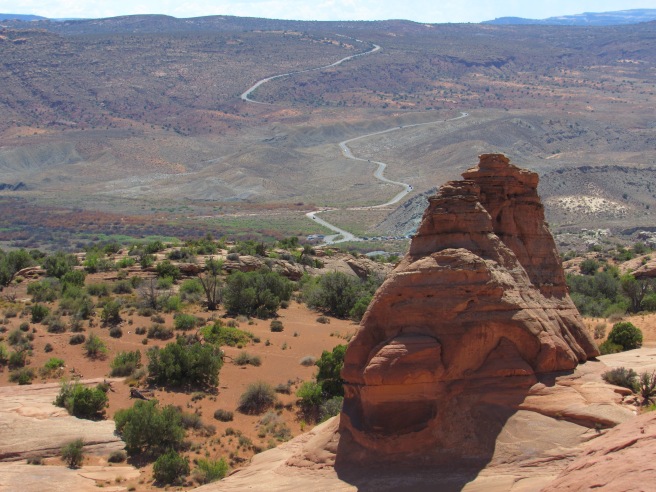 On returning to the car park they drank several more pints of water (seriously, it was so hot!), woke me up and we headed off to see some of the more accessible arches. On the way we saw this little lizard friend, who was also hiding out from the heat…

After pressing our faces against the cold air in the car we headed on, and saw the Skyline Arch for the first time! 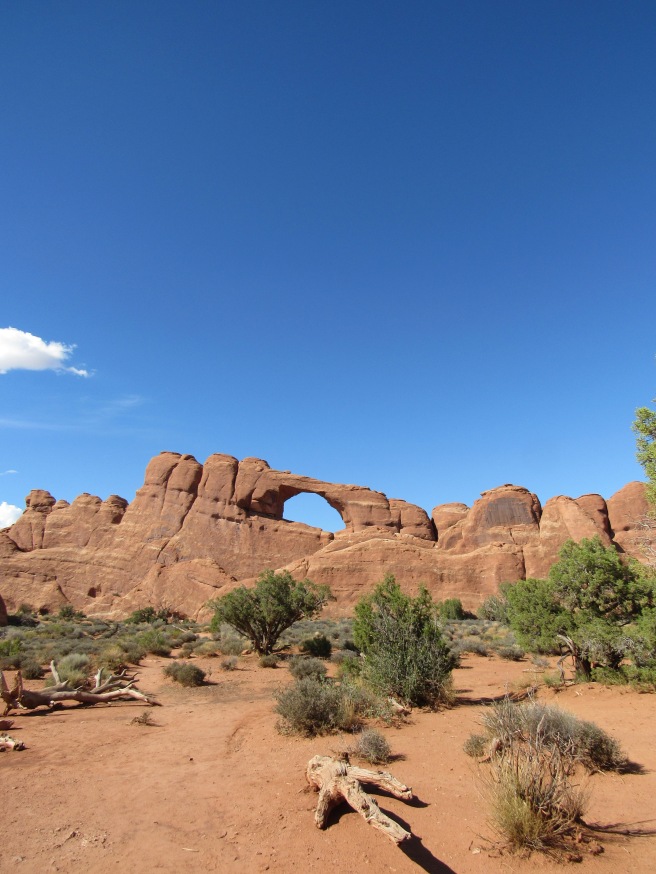 This was in a much more remote section of the park, so it was wonderfully empty and quiet. Many pictures were taken, and much scenery was enjoyed! 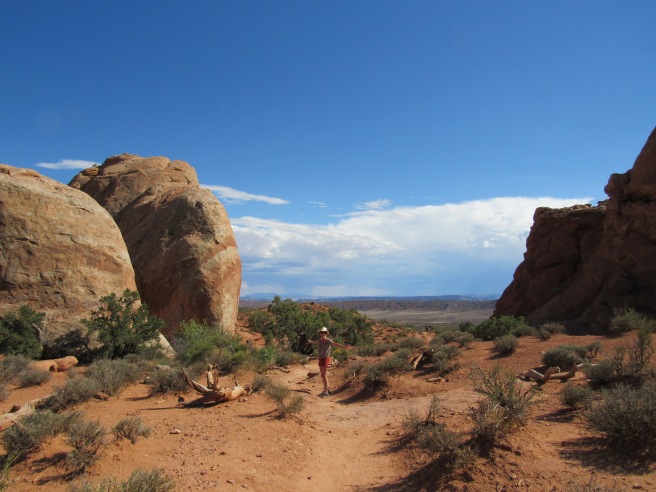 We continued our exploring late into the afternoon, with our body temperatures slow approached those of Johnny Storm.

(+10 points for anyone who gets that reference! I couldn’t resist 😉 )

Eventually the park closed and we returned to the hotel for very cold showers and more attempted hydration.

That evening we went out to the delicious Steak restaurant in town, called the Moab Grill. Unfortunately I didn’t get any pictures since I was too busy stuffing my little face with a big steak and local beer, both of which were very delicious! Barry and Margaret treated us, for which we will be eternally grateful 🙂

That night we rested well, ready for more adventures in part two…

One thing I love about Colorado is the sun. It’s not just that it is uplifting, or that it makes outdoor sports more fun, but it’s much more pleasant to cycle in. Fort Collins itself is absolutely bike crazy.

There are 28 Bike shops in Fort Collins (this compares to 9 in Coventry (UK) which is twice as big as Fort Collins – 316900 people vs 156480 in FoCo), and there are lots of good biking events like races, fancy dress events, trail routes and bike to work day. 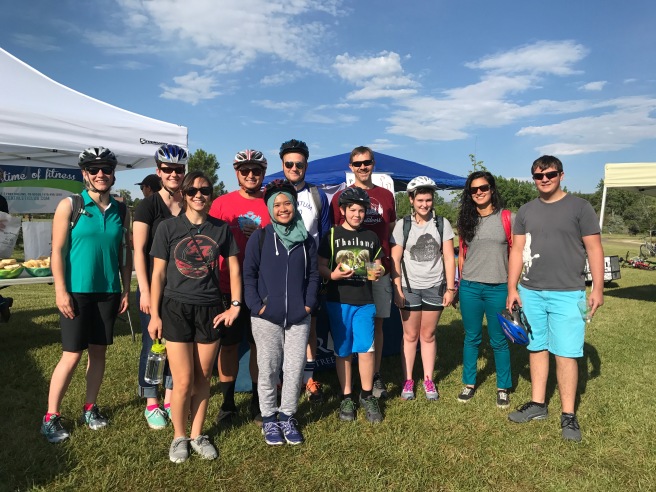 On Fort Collins bike to work day, there are 60 Breakfast stations set up all over town, most of which have Bike tuning stations. My work colleagues and I were kindly given the early part of the morning off by our boss (Chuck, in the red top in the background) to go and tour around these stations, get some free breakfast and get our bikes tuned up.

We also ran into Smokey Bear, a US mascot who warn’s of the dangers of Wildfires, so naturally we got a picture together: 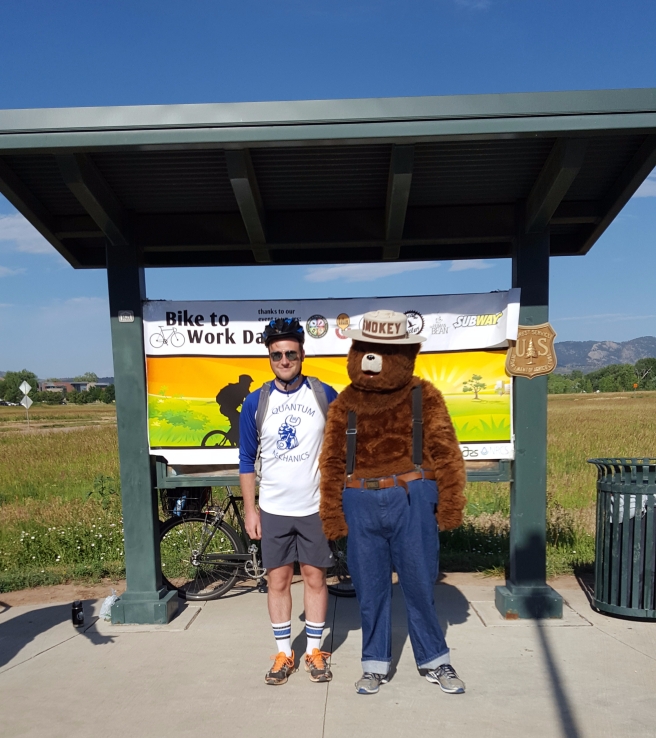 After several more stations and loading up on OJ, breakfast burritos, granola and fruit, we made our way to the New Belgium who were reportedly doing beermosa’s (though they had run out by 8.50 when we arrived, so I ended up with Fat Tire and a pizza bagel). 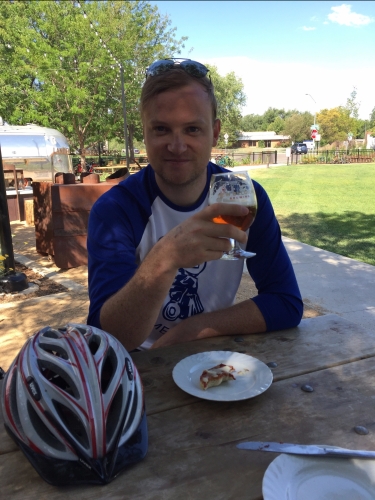 To top off the morning and digest our beer, we played Rolle Bolle. It’s a game, a bit like shuffleboard / curling where you have to roll a ball that looks like a cheese wheel along a cylinder and try to land it at the other end without going off. 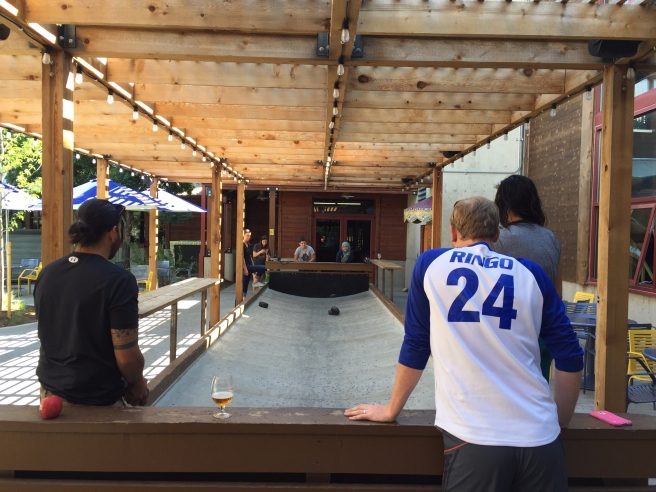 Needless to say, it’s pretty fun and just the right amount of mental exertion after a morning of cycling and half a beer.

PS/ For those wondering, I was wearing my new Softball Top for the Quantum Mechanics, and I went with the name ‘Ringo’ as ‘Rob’ is too difficult for most Americans to understand in my accent.

You’ll be pleased to hear that we’re continuing with our healthy weekend hikes! This weekend we decided to try the Horsetooth Falls hike, since we’ve heard great things but never been. Happily this is also a relatively short hike, since it’s 10 billion degrees and we’re still not quite hardcore enough to walk ten miles uphill in such conditions.

Once we layered ourselves in our bug spray/ sun tan, we were off! It’s a pretty hike, and we were treated to nice views almost immediately: 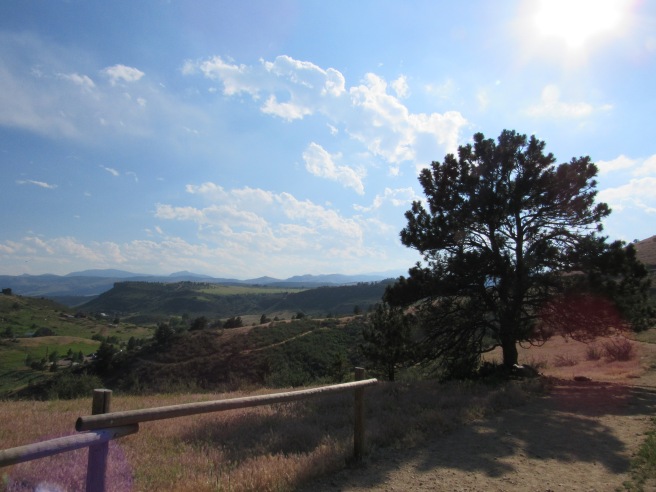 I think the net elevation change throughout the hike is only about 300ft, but it did seem to go up and down quite a lot! We bravely hiked up and down the slopes, and were also treated to very nice views overlooking the town: 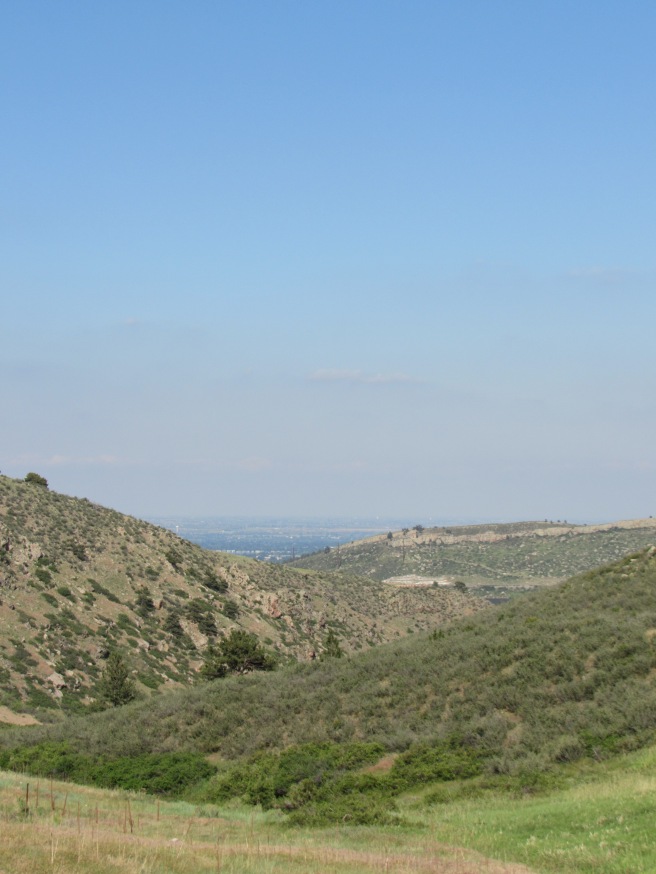 You can just see a patch of water in the picture above, which is the Horsetooth Reservoir. It was very pretty, despite the fact that there were an absolutely obscene number of people boating about. It turns out that a large number of people in Fort Collins own their own boats, and I’m still surprised whenever I see people casually driving their boats through town.

Before long, we reached the top of the waterfall! 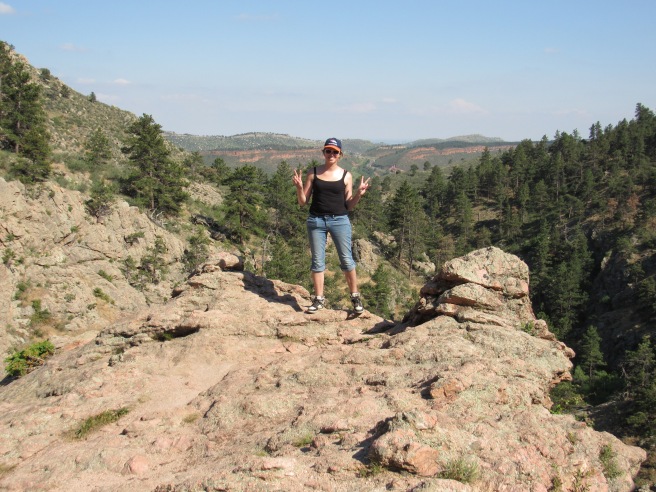 My wonderful husband packed Cheese and Crackers, so we snaffled these down while resting our legs. We also drank plenty of water, because hydration is king! Before long though, we set off again…

We walked back along the stream at the top of the rocks, which feeds into the waterfall. I was very excited to see that there were some butterflies sunning themselves by the water, since it made for some fun picture taking opportunities!

As well as the butterflies, the pools themselves were very pretty. 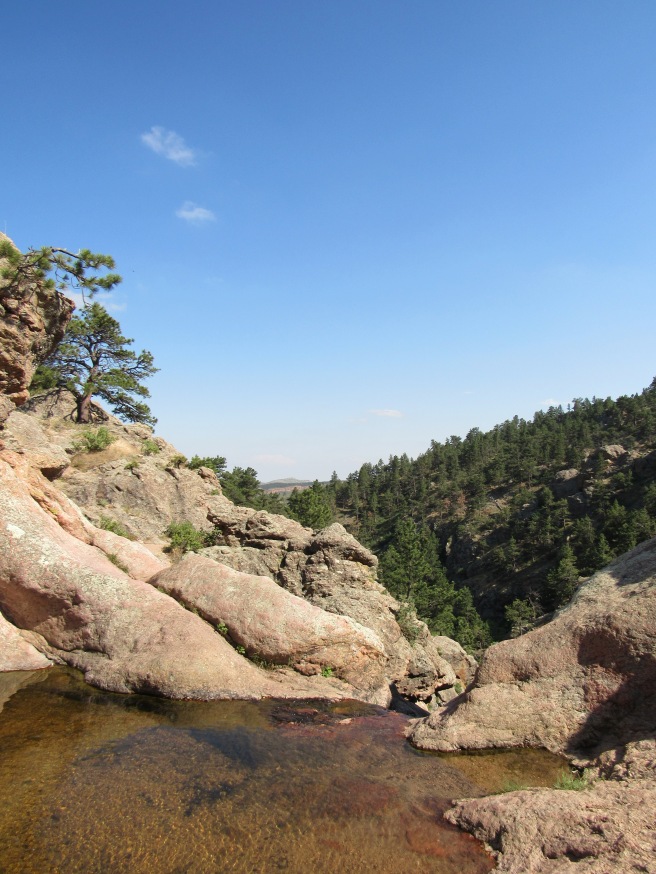 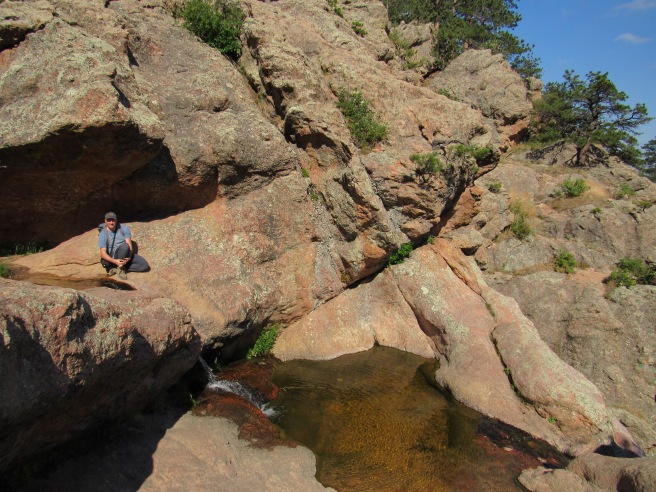 I would absolutely have gone splashing around in them if I wasn’t slightly worried about accidentally falling over the edge… Maybe next time!

After we were satisfied with pretty views we headed down to the bottom of the waterfall, so that we could actually see the mighty waterfall for which this path is named!

Possibly this is not the optimal time of year for waterfall viewing, but the sound was very soothing nonetheless!

On the way back we were treated to some more open spaces and beautiful views: 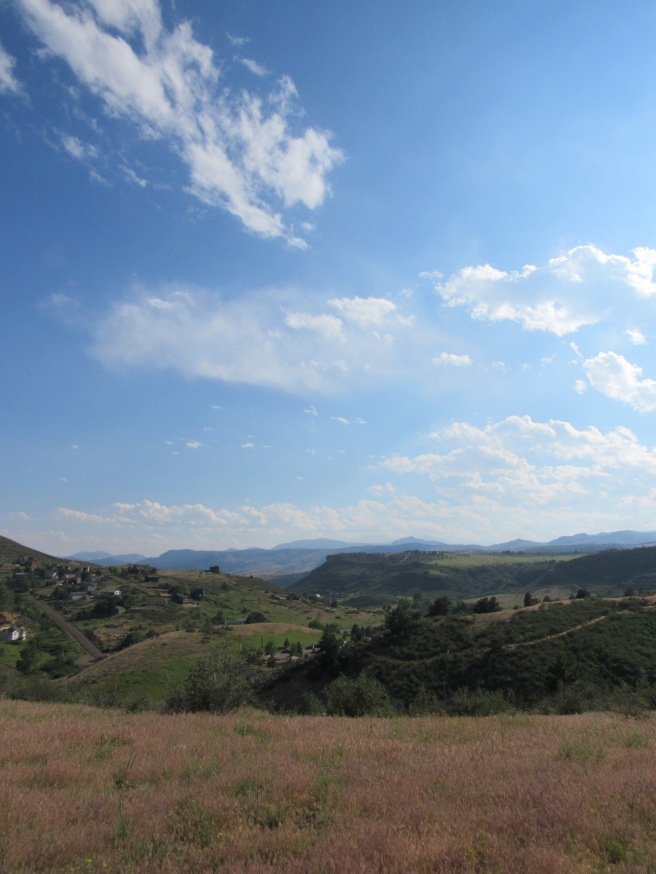 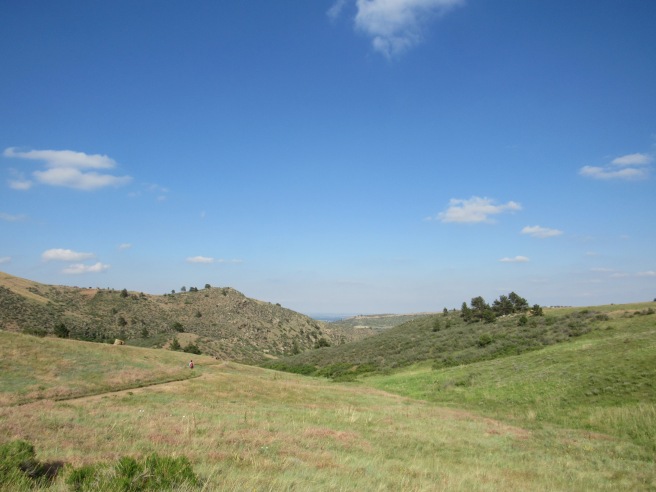 Then before we knew it we were back to the car, and ready to head home. This open space is also the home of the famous Horsetooth Rock, which is the next hike we’re hoping to do. This hike is a more challenging six miles, with a cheeky 1,761ft of elevation gain! Possibly one to try out on the visitors 😉

This weekend is Independence Day here in the US, so we have a lovely four day break which includes Rob’s Birthday! More fun to follow!