We’ve had a very long and busy week, so you’ve in for a very long post with many pictures! Rejoice/ brace yourself as appropriate – part two will follow in the next few days so you have a little time to recover between the two 🙂

Last week was Thanksgiving, so Thursday and Friday were national holidays and our friends Kim and Leoni very kindly invited us to visit them in Utah, which was extremely exciting! As well as this Tuesday was the night that we had tickets to see one of my very favorite bands, Puscifer, so there was much to do. Since we needed to rent a car to do both it made sense to combine both trips into one truly epic, three-state road trip:

Very, very exciting times. First step was to hire an awesome car which the lovely Rob took care of, so for a week we had this beast of a tank which we nicknames Troy Wilson, named after the very manly man who rented us the car! Below is a stock photo, since our white car was dirty almost immediately:

It’s hard to appreciate its size without a point of reference, but it had seven seats, easily fit the skis and can apparently fit three bicycles in the back when the back seats are down… We were impressed. I drove it with the seat as far up and forward as it could possibly go and still had to lean forward to adjust the rear view mirror!

So, we set off Tuesday after work and drove down to Denver to see Puscifer. The show was excellent, I had such a good time! They’re amazing musicians and are well known for putting on crazy spectacular life shows. An example of their music, for the curious:

Their opening act was 20 minutes of luchador’s wrestling, it was outstanding.

After that epic excitement we stayed overnight in Denver in a Super-8 motel, so that we would be refreshed and ready for our trek across the Rocky Mountain National Park!

Luckily the actual navigating of this road trip was very straightforward, so we didn’t have to worry about getting lost. It is hard to tell from the map but the I-70 pretty much connects Denver and Moab, and is very well maintained so even though we were crossing the snow covered mountains the driving was not icy or excessively steep, thank goodness! Needless to say, the drive to Moab was very beautiful. The mountains were breath-taking and we could often see people skiing down the sides of various mountains since we passed very close to Breckenridge and Vail, as well as several other smaller resorts.

After the mountains we stopped off for a walk around and some lunch at Glenwood Springs, a very pretty town that happened to be about halfway between Denver and Moab. There are a lot of famous local hot springs of course, as well as great views and some lovely restaurants. We ate at our first American Smokehouse BBQ, which was beyond delicious! We needed to walk around in the cold snow to wake ourselves up a little after stuffing ourselves thoroughly with burgers and ribs! Luckily it was rather cold, so this did not take long:

Heading off from Glenwood Springs we continued on to our next big stop, which was Moab. Moab is a big, beautiful national park full of amazing rock formations and great views – it’s extremely popular for adventure holidays, there were a lot of options for hiking, climbing, off-roading and canyoneering, all of which were very tempting! But first, our first border crossing…

We were extremely excited. The picture on the sign is actually of the Arches National Park in Moab, which is what we were travelling to visit. Observe, the real thing:

As well as several other lovely shots of the landscape! It was honestly like being on Mars or something, it was hard to believe the rock formations and you could see such a long way which nothing man made visible anywhere. Most of the rock was bright red, but some places it was much paler and Jade-colored which I’ve never seen before. We really couldn’t capture how amazing it was with pictures, but we made a few attempts: 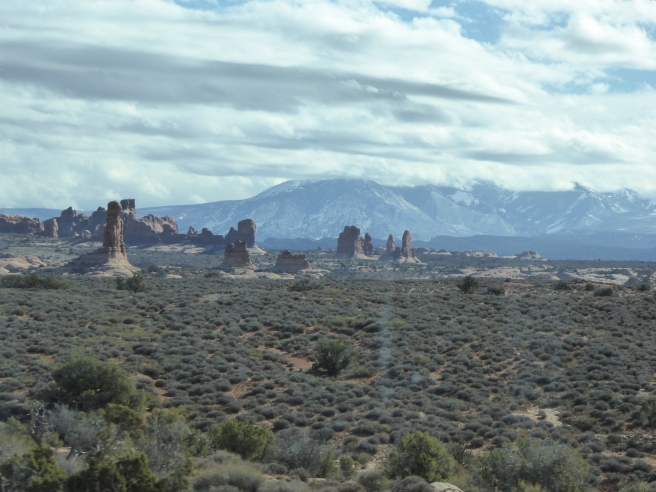 Lucky visitors to us here in the US may get a chance to see it for themselves! We are hoping to be able to go back and explore it more in future, as we were only there for a few hours before we had to set off for Salt Lake. Notice how warm and sunny it is in that picture compared to Glenwood Springs the day before, this US weather is not easy to dress for but we love it!

Part two to follow shortly, where you can learn about our exciting adventures in Salt Lake City and about our complete lack of any adventures in Wyoming. Hope you enjoyed so far!