As you may know we are currently on a lovely holiday with the Channons, skiing in Steamboat Springs. It is BEAUTIFUL, although also extremely snowy!

Steamboat itself is about three hours East of us (it would be closer, but you have to go around the Rocky Mountains) and is internationally renowned as an amazing place to ski. As well as the massive Mount Werner where the ski resort is there are a few other skiing areas, as well as some lovely Hot Springs, which is what the town is named after. There are no actual steamboats, the bubbling springs just make it sound like there are 🙂

I mentioned that Mount Werner is massive, but that probably doesn’t do it justice! The town itself is at 6,732 ft above sea level, but the peak of the mountain is at 10,570 ft! The highest point that you can get to via skiing is near that, at around 10,384 ft. So, quite a long way to ski down! Although this was put into perspective for us when we found out that there are people to eschew the long gondola rides to the top in favor of hiking up the 3,500 ft themselves! Needless to say, we did not…

At Barry’s alarming request we started strong on the first day (Monday) having arrived to our wonderful Condo on the Sunday night! So we got up at eight, snaffled down some toast, and off we went on the first lift:

And away we went! I’m still really not good at skiing so wasn’t anywhere near the guys standard, but they indulged me with some nice Blues and Greens to get us started! Here I am, looking sort of like I know what I’m doing:

A lot of the runs are very nice and wide like this one, which makes it much easier for a beginner like me to control my speed by making lots of turns. We skied down a lot of fun runs like this, with brief breaks on the chairlift to rest our legs! After a few hours, we took a nice break up on the mountain. There are a few places to eat dotted all over the slopes that are only accessible via skis, and they had wonderful views! Here is Rendezvous, where we stopped:

And here we are enjoying a beverage in the sun! It was an extremely sunny day which is how we ended up a little pink, but we definitely appreciated the warmth 🙂 One of the reasons that I was a bit apprehensive about skiing was that I thought it would be very cold – rest assured that this is definitely not the case! You can see that as soon as we could we threw our ski jackets to the floor and enjoyed the sunshine:

And then back to it! The preferred approach to skiing with Team Channon is to get the first lift up as mentioned, and to then keep skiing until the lifts close at around 4pm with plenty of snack breaks in the middle. Skiing is pretty exhausting, so doing a full eight hours was a bit of a shock to my squishy body! Still, much fun 🙂 🙂

In the evening we explored Downtown Steamboat, with its amazing food and beer! For the next day it was more of the same, although at a gentler pace since my poor legs were a little tired.

Strangely, Barry managed to pick up a hitch-hiker during a slower phase of skiing! Meet our new friend George:

We think we picked George up when he fell out of one of the toboggans, which was probably quite a rude awaking from what we assume was his hibernation. We suspect George is a Doormouse, and a very cute (if slightly mussed up) one at that! Upon being woken up and finding himself in the snow he quickly ran over to Barry and hid in the little well under his shoe, and we think planned to stay there until spring. It was extremely cute! 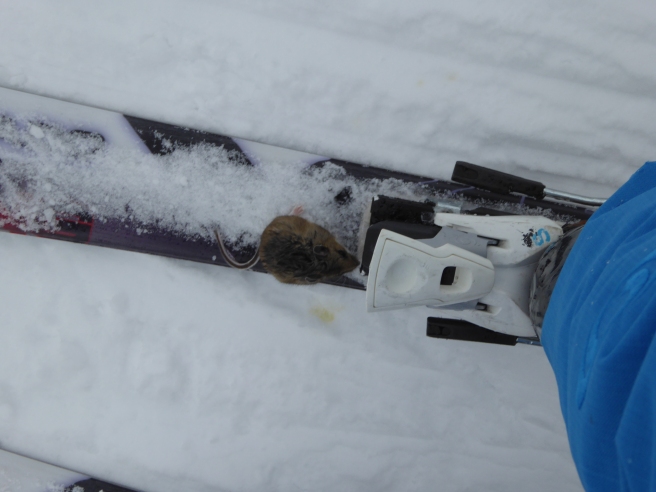 This turned out to not be the most secure place for a little mouse, and he fell off into the middle of the run! He then sat there waiting for Barry to rescue him, which Barry did accompanied by his new assistants – a bunch of young school girls having skiing lessons! As you can imagine, some chaos ensued. Luckily George safely made it to the trees in the end!

For a bit of a change of pace after all the skiing excitement we took a day off to go and visit Dinosaur National Park, which is on the border of Colorado and Utah. As well as being a naturally very beautiful area, Dinosaur is so named because of the large collection of dinosaur bones that have been found there, many of which have been kept in situ for visitors! This all sounded very exciting, so off we went to Utah:

It was about a two and a half hour drive, but well worth it. First, we were very impressed by the Dinosaur on display, which we lovingly named Cuthbert.

After a quite long discussion about whether his colouring was accurate (unlikely, but hard to know for sure), we headed on into the actual park.

As I said, the main feature is the big wall of dinosaur bones that have been kept in situ on display. The whole park used to be a river, and so a large number of dinosaur skeletons were located in the river bed either as a result of a flash flood, or a drought. Over the year some of these skeletons drifted apart into individual bones, but others remain in their original shape. When the river bed dried up the bones were buried, and they were excavated in the early 1900s. A lot of the bones we had seen without realising it, including the Barosaurus that is famously on display in the Natural History Museum in New York! But back to the wall:

It was a little bit mind-blowing, and it was fascinating to look at it and slowly be able to pick out individual animals. Strongly recommend a visit if you are in the area!

As well as the dinosaur bones, there were some ancient Petroglyphs! This is art that has been carved into a rock surface, in a similar style to cave art. Again, it was a little mind-blowing to think that these carvings had been around for such a long time, and they were very interesting! There were a few of them scattered around the park, so we did a tour of these. The style is very distinct, and often they are quite high up on the cliff walls: 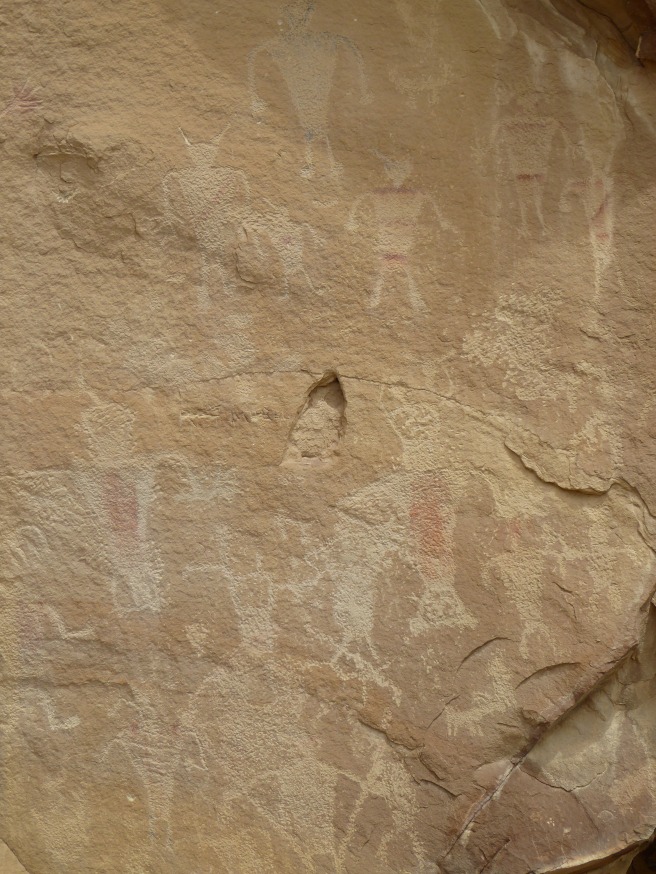 The rest of the park is also very beautiful, you can tell that the whole landscape has had millions of years to take shape. This post will very much become a photo album from now on, since the pictures really speak for themselves! There were some super distinctive layers in the rock:

Split Mountain, so called because the rocks are at an angle, which shows a really excellent range of rock colours. Again, it is really hard to capture the scale of this, but at least I’m using my own photos this time 😉

This awesomely named Turtle Rock, which again caused much debate about whether or not it did resemble a Turtle:

So yes, much fun! We were in the park for a good long time exploring the many lovely things before returning back to Steamboat for the second half of our wonderful holiday!

We are here until Sunday, so hold tight for Part 2 of Steamboat!