We’re continuing fun times in Fort Collins with the cousins, so time for an update. On Tuesday we partook in the main form of entertainment in Fort Collins – Brewery Tours! Fort Collins has a population of around 150,000, and a magnificent 21 breweries – so around one brewery for each 7100 people 🙂 This doesn’t compare to the number of restaurants (about 400, so one for every 375 people), but still pretty outstanding!

We started at New Belgium, which is my personal favorite and somewhere that you will definitely all be visiting, to do their free tour! It lasts about 90 minutes, contains tasters of many, many beers and is extremely informative. Plus the New Belgium Brewery is just beautiful and the people are so relaxed, so it’s always fun 😀

We started the tour by learning a little about the background of the brewery, which as you can imagine is aiming to produce Belgium style beer in Colorado. Since they started in 1991 they’ve grown massively, and you may have tasted one of their most popular ales which is Fat Tire. We then went on to taste several of their other beers, of which they have a fabulous range:

We then continued to drink as we walked around the rest of the site in the lovely sunshine, and it was great.

After all the drinking we were feeling a little sleepy:

But we partied on. Next stop, Odells!

Odells is another of the most famous breweries in Fort Collins, and widely considered one of the real local treasures. They also do a great range of beers, and have a really beautiful site. We were too late to do their brewery tour, so we tried a few of their taster flights instead and also got some tacos! All whilst enjoying their wonderful patio: 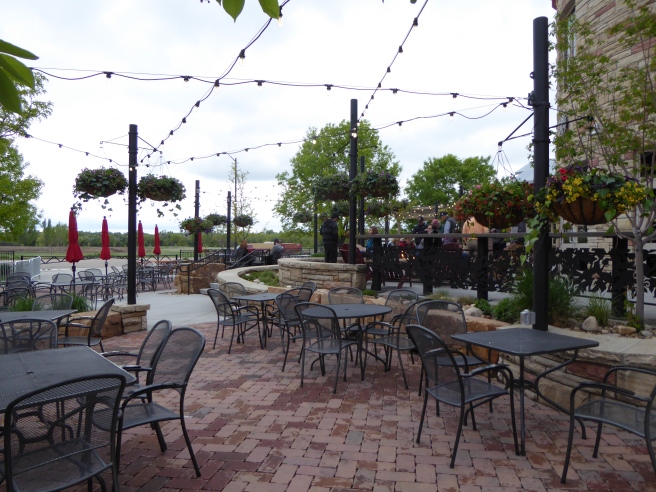 The taster flights were pretty wonderful, and they had a really good variety. Here are some of their tasty beers:

As you can imagine we were even more sleepy leaving the brewery:

But we continued on to Cooper Smiths, which is a brewery in the Old Town Square. It’s very pretty, and has a great games room! We had a great time playing snooker, followed by the magical game that is Shuffleboard 🙂 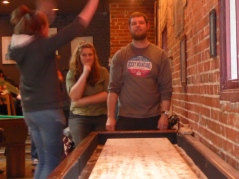 We played the traditional way – Guys vs Gals – and I’m proud to say that the gals won both rounds! At that point the guys accepted their inarguable inferiority, so we moved on to the also exciting table tennis. Here there were no measurable winners, but the loser was definitely the guy playing pool next to us who was repeatedly struck by our ball, usually in the face mid-shot. We spent a lot of the game apologising.

To restore our dignity we had a few rounds of table football to finish the night. We played Channons vs Cheethams, and Channons just scraped victory over the few games. See if you can spot the common player amongst the winning teams! That night, we slept well 🙂

We continued the fun on Friday with the Fort Collins Foodie Walk! This is a self guided walking tour of some of the food stores in Fort Collins which happens once a month, put on by the stores. They offer free samples and tell you more about their shops, and since they are truly hipster style shops this is pretty exciting. One big highlight is the Tea Store, which is truly wonderful:

There is also an extremely fancy Olive Oil shop, will sells an absurd range of olive oil.

And yet somehow everything in all of these million bottles is interesting and delicious. Again, you must visit and sample if you come to Colorado. Here is Marie loving the balsamic vinegar:

We also visited the chocolate stop, the cheese shop, another chocolate shop and the spices/ liqueur store! Sadly we were too busy feasting to be vigilant with the pictures, so that’s on me…

After the food tour, we went on to get some pizza at the delicious pizza shop Slyce. This was enjoyed by all, but especially by Simon:

It really is top quality pizza. We followed this up by sharing a toffee apple, which we enjoyed initially but soon came to regret. Still, it merited a try:

After this second round of feasting we decided a walk around Old Town was needed. They’ve just added new flowers to the square and some lovely lights, so it looks rather fabulous:

But yes, so pretty! We ended the night with a drink at a new distillery that has just opened near our apartment called Mobb Mountain. It turns out to make extremely strong Whisky, Gin that tasted like Whiskey, and cocktails that are composed almost entirely of Whiskey. I’m not a big fan of Whiskey so only managed a sip of my cocktail, but the interior was beautiful and I love what they are trying to do!

So yes, just some of the delicious fun available in Fort Collins! More of our adventures to follow soon 🙂