Hello again! I hope you’re ready for more exciting pictures of the US – I have so, so many to show you 🙂

So, on with the adventure! We’d just finished Vegas and were heading off to our next stop, which was Flagstaff. I’ve always wanted to visit Arizona so was extremely excited, and it did not disappoint!

We left Vegas in the morning and drove over the day which meant that we got some pretty amazing views of the Grand Canyon and other scenery as we drove! 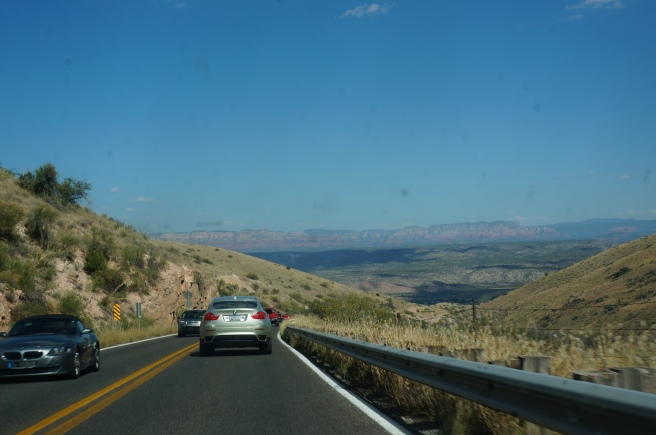 There were much better views that this, but we were too busy gawking to get the great shots. It sounds kind of stupid to say but the Grand Canyon is really, really big. It blew my mind a little.

From Flagstaff we travelled south on a few day trips to visit famous small towns in the area – first stop, Jerome!

Jerome is an old cowboy town that became a ghost town when the gold and copper deposits dwindled around the 1940s, causing the population to drop from over 15,000 to the 450 people or so that live there today:

It’s at a similar altitude to Fort Collins (~5000ft) but feels much higher since it’s basically on the edge of a hill. Sarah chose to avert her eyes for much of the driving, which was the usual road-next-to-an-unfenced-cliff scenario…

I confess that I did also want to go since it’s where the lead singer from Tool lives, but don’t panic! This is not your usual stalker/ murder scenario, the attraction was actually that the town and the area has inspired a lot of his music, and he also runs a store and vineyard right there in this tiny city in the middle of nowhere 🙂 There store was pretty weird, but I loved it. All the clothes were modelled by zombie mannekins that would attack you if you got too close, plus there was an in-store barber if you felt like getting a shave!

The wine tasting store was also amazing, very cute. I sadly couldn’t drink since I was our designated driver, but I had a great fun taking pictures, asking questions and living vicariously through Sarah 🙂

After Jerome we moved on to Sedona, which is famous for its beautiful location and red rock surroundings. Again we were treated to another stunning drive!

We decided to go for another hike after the indulgence of Vegas, so we hiked up a red rock structure called Cathedral Rock:

Then you climb over the top, and see this!

Much water was drunk, and we took many, many pictures 🙂 We also took quite a few pictures on the drive back to Flagstaff as the sun was setting, I now definitely understand what photographers mean when they talk about getting the best light at sunset! 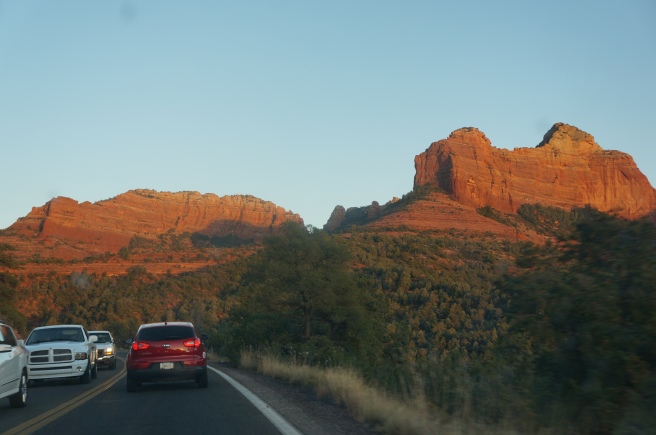 I’m running out of synonyms for ‘pretty’, but it was all just so very pretty! I will look up some more adjectives for next time 😀