Somebody reading our blog may justifiably assume all we do is go on holiday to wonderful places like Moab, Tulum, and Seattle. Sadly we can’t be on holiday all the time, but we still find ways to get up to mischief in Fort Collins.

This summer when Mum and Dad (the Channon’s) visited, we were slightly concerned if we could find new things to do as we had already proved Fort Collins is awesome the last winter when they visited. Fortunately (as is a common Channon trait), we managed to get into all sorts of unexpected mischief around town. We started off with a trip to The Whiskey, a bar with over 1700 whiskeys from around the world. You may notice from the picture above that Cat has a whiskey-free crazy green cocktail – basically the equivalent of ordering fish and chips in a Indian restaurant – but they rest of us really enjoyed the whiskey, atmosphere and strangely polite waiter. (Cat admittedly does describe the taste of whiskey as pthe pthe pthe, so it’s only fair)

Next, was the Fort fun softball batting cages for Dad to demonstrate his Cut shot through the covers…

… and Mum to let the ball know who was boss: 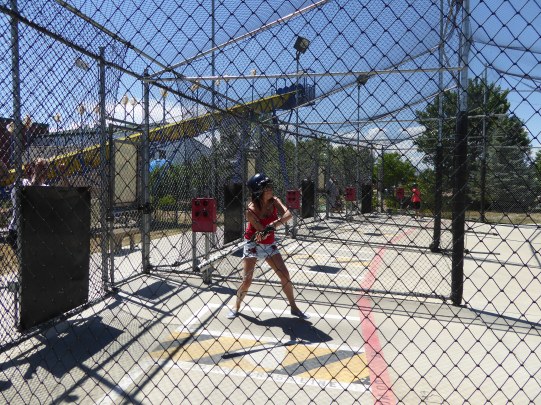 I also wanted to play some golf while they were here (as last time they visited it was negative Celsius). Cat suggested we should warm up with some mini golf to work on our putting, which worked surprisingly well as 3 of us had hole in 1’s!

With this celebration from Mum probably winning the most style points, especially after hitting her ball out of bounds a few holes earlier:

Afterwards Dad and I played real golf at Collindale golf course in a somewhat overheating 98 F (about 38 C). This picture below was Dad’s second favorite as he called it “Oops I forgot to hit the ball”:

With his favorite being the HOLE IN ONE I hit about 3 holes later:

(This was my best impression of a politely smug golfer, notice the pitch mark at the front of the green)

Hole in one’s are very rare at amateur levels (maybe 1 per lifetime playing golf), so it was really nice to hit one at 177 yards on round with Dad there. He also called it as soon as I hit it, but I was convinced that that sort of thing doesn’t happen to janky golfers like me and it must have gone off the back of the green, wasn’t I surprised! Now you might think this is about the most unusually and exciting thing that could happen during the holiday but then we went for a casual hike…

The Arthur’s Rock trail in Lory State park is one of out favorite local hikes as its moderately challenging and the views of Fort Collins and the reservoir are fantastic from 1000 ft higher altitude:

Mum and Dad were very excited to see some American wildlife, and sure enough we spotted a Turkey Vulture right at the top of the trail:

Here is Cat standing a very safe distance away from Terrance:

Now put yourself in our shoes. You have been hiking and seen some pretty birds and butterflies. You are vaguely keeping an eye out for any bears or other big wildlife, so you are walking back down the trail looking most up and sometimes in the distance. What you are not expecting at this point in as encounter with a rattle snake!

This cheeky chappy was about a foot from the trail, and rather than pre-warning me and Dad who were chatting and could be heard coming from a distance, the rattle snake decided to angrily shake is rattle when we were right beside him. Needless to say we both screamed like little girls and jumped away (jumping backwards uphill on a trail is no mean feat!). A ranger came by and told us that they are poisonous, but can only spring half of their body length so we were probably fine. He had about 8 rattles on his tail which makes him 8 years old apparently (you learn something new every day).

At the end of our holiday, we all went to our local pub (the forge) for a nice quiet sit down, happy to safe from all the excitement.