One of the best things and one of the worst things about living in the US is the food, and whilst we’ve shown you a lot of the good food I wanted to show you a little of the less delicious side of things for your enjoyment.

It’s much easier and cheaper to eat out in America, so people generally cook less and eat out more. There are also much bigger wage gaps, so there is a need for some of the food to be very low cost. The good part of this is that the fruit and deli section in most supermarkets (called Grocery Stores here in the US) are extremely awesome:

But there are also horrors. King Soopers where we shop is actually really nice, but not nice enough to be free of the occasional catastrope.

The meat section for example has a nice deli, and whilst meat standards in the US can be pretty poor we are generally okay here in Colorado 🙂 That said there is also some ‘pre-cooked’ meat available that is always a source of concern…

And there is also a strange tendancy to pack things in cans/ tubes. I’m assuming that this has something to do with making sure that everything lasts longer and can be stored long term, but it’s still a little odd:

What else can you get in tubes you say? Glad you asked!

Before you ask, no – I have no idea why croissant is spelt ‘crescent’, nor why these are considered ‘dinner rolls’. We have also not tried them, because oh the horror. However we have given another of the canned desserts a try, again as a result of a weird cultural interpretation. Brace yourself, for the English section of the supermarket!

This is actually awesome, if not a little expensive. The Bisto gravy is especally appreciated, as are the Maltesers 🙂 However they also have a ‘traditional english dessert’ that is inaccurate at best and a little weird. Behold, the food of our people, according to America:

Unsurprisingly it doesn’t taste that good once you scrape it out of the tin and blast it in the microwave, but it could be worst. And if you buy this as a gift for any American the will be amused and delighted, so that’s a plus!

It’s probably also worth mentioning that the Royal Family is ALWAYS in the news somewhere when you go past the magazines. Based on the titles we’ve seen so far the poor royal family have seen more action that the Game of Thrones people:

Anyway, on to the American section of the store, which is basically the whole rest of the store. If you want anything in a US flat pattern you are not out of luck!

I actually think that all of the above is pretty awesome, I love the American sense of National Pride. Take a lesson, England!

Anyway, back to the gross food. More horrors await in the ready meal sections: 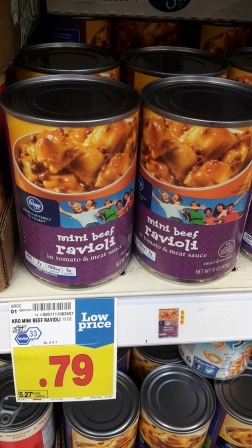 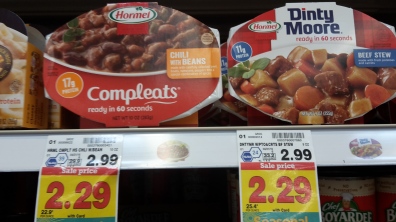 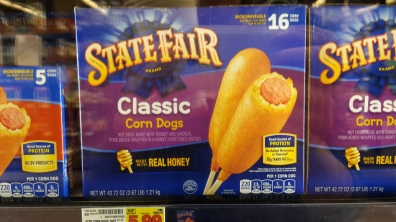 I didn’t get any pictures of the ingredients lists, but rest assured that they are not entirely foody… Corn Dogs continue to be a real source of fascination to me, although we haven’t given them a try yet. We probably want to have some medical support nearby before we start eating them.

Speaking of non-ingredients, colours! I hope you like Powerade, now available in the following extremely bright colours:

And finally, a sweet memory of my old company, still with real cheese!

So yes, there are lots of delicious foods all over the place, but many hazards await the unworthy. Be vigilent, friends! And more posts soon 🙂