Welcome back to Seattle, where after the fun of the aquarium we decided to double down on Nature and visit one of the many state parks in the area…

Washington State, especially around the Seattle area, has a whole bunch of spectacular forest. Not just any forest though, but Old Growth Forest! This is basically what it sounds like… very old forest that has been undisturbed for a long time, so is massive and has lots of rare plant growth.

We started our Nature exploring with Squak State Park, and what we thought was a nice short four mile hike…

The forest itself was beautiful, and there was almost no-one around which made it even better. As with all things American it was also very big!

The whole hike was supposed to be about a four mile round trip, which we thought would take us about three hours if we were going slow. It certainly helped for Rob and I that we were once again back near sea level, where walking is a much easier task! Mum too was in her element:

We walked for about two hours whilst going uphill the whole time, which suggested that perhaps we were not as quick at walking as we thought we were. The humidity was also an exciting challenge, and something that us Mountain people had completely forgot about! Feeling good, we decided to risk getting attacked by bears by sitting down and having a lovely sandwich break. Possible bear attacks are another advantage of Old Growth Forest 😉

Full of sandwiches, on we went! 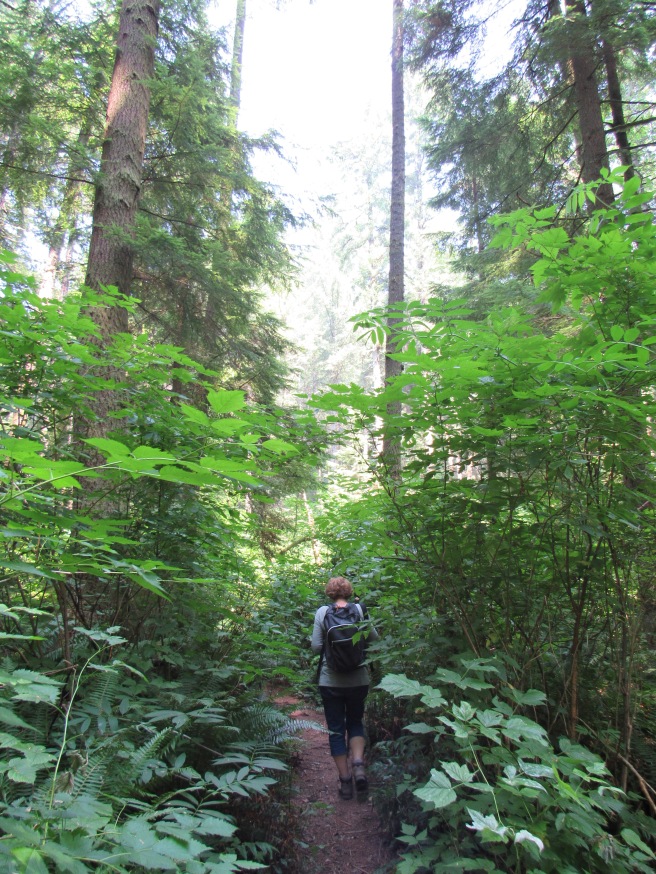 The whole hike really was stunning, although all in all it ended up taking us about six hours and was most definitely not four miles! A lot of US hiking trails only list the one way distance as their overall distance, especially on there and back trails, so it’s very possible that the map reader (…me) made a very understandable error there.

Despite my shenanigans, we did eventually make it back to the car 🙂 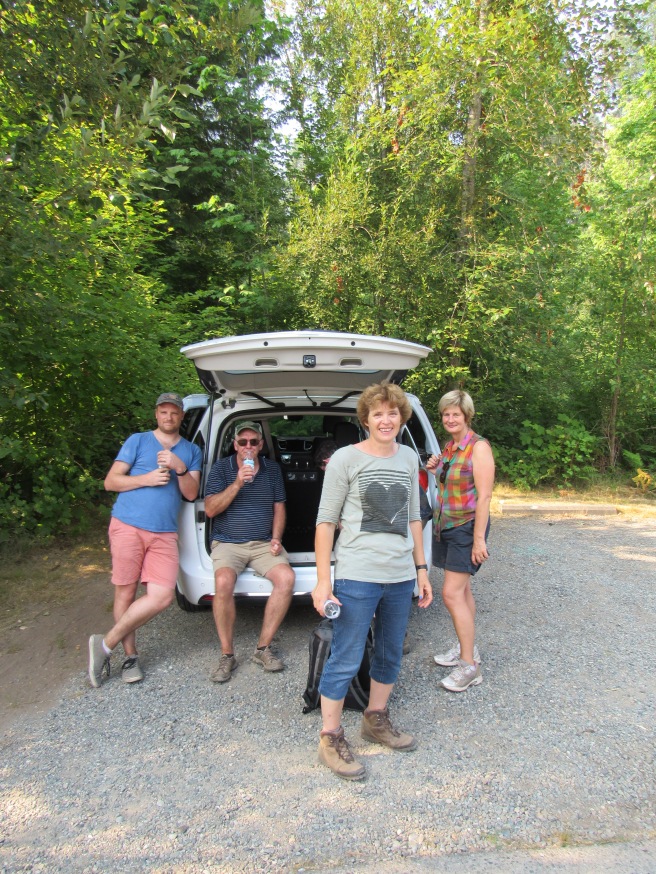 After our fun with the forest we decided to continue our nature theme the next day, but with much less walking about. We booked in to do the thing that I was extremely excited about… Whale Watching!!

Specifically, Orca/ Killer Whale watching! We booked in with one of the local tour groups, put on all our warm clothes, and gripped our cameras tight. To see the whales we actually had to go quite far out to sea, and even briefly cross into Canadian waters. Fortunately while some whale tours offer smaller boats so that you can get really close to the killer whales, we opted for one of the big, comfortable boats and the reduced chance of getting eaten.

This meant that we ended up having a few comfortable few hours boat trip out to the San Juan islands, and got to do some top quality bird watching on the way! And yes, I like bird watching now. Pity me. But at least I got some good photos out of it 🙂

I probably would’ve got more photos, but about an hour into the trip the fog descended! It was actually very beautiful, although did obviously have a pretty detrimental effect on visibility…

The picture above was literally as far out as we could see in any direction for almost an hour, which did make us start to worry about our whale watching chances. Fortunately once we got a little further out it cleared up again, and then all we needed to worry about was how much ocean there was. It sounds silly, but seriously – so much ocean.

You can see a few ships in the picture above, and we ended up doing what is done in most nature watching tours… follow the other ships until they find something. Fortunately we didn’t have to wait long!!

Very exciting times! There was a whole pod swimming along together, and I got somehow even more excited once I spotted the baby whale ❤

It’s actually a miracle that we didn’t capsize the boat – the whales could stay underwater for a few minutes at a time, so when they disappeared everyone would run around the top of a boat in a panic trying to figure out where they were, and then run over to the same side once they were spotted again. So freaking cool! 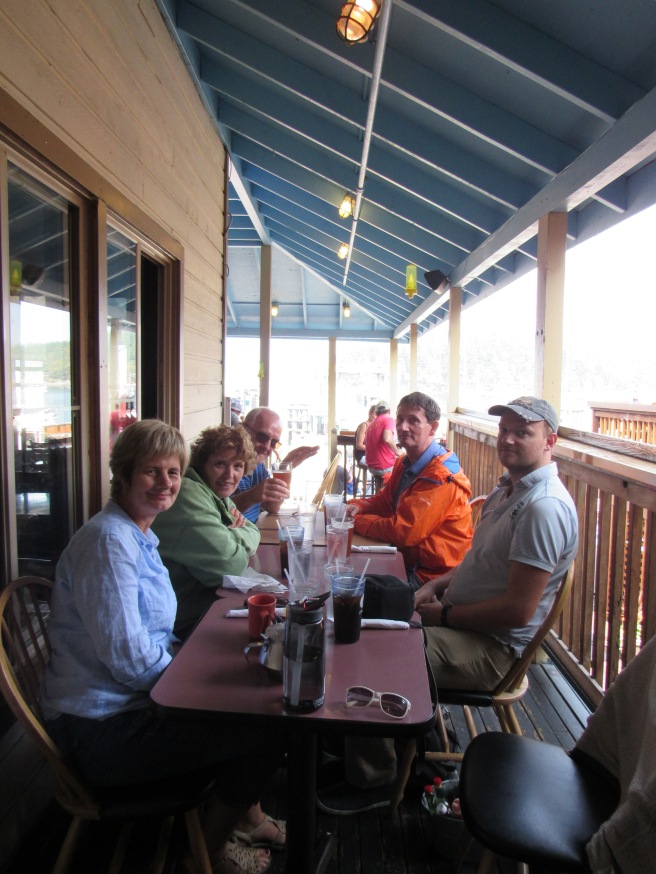 Then back to the boat!

On the long way back towards Seattle we were treated to even more delights, including some seagulls, cormorants and extremely sleepy looking fur seals: 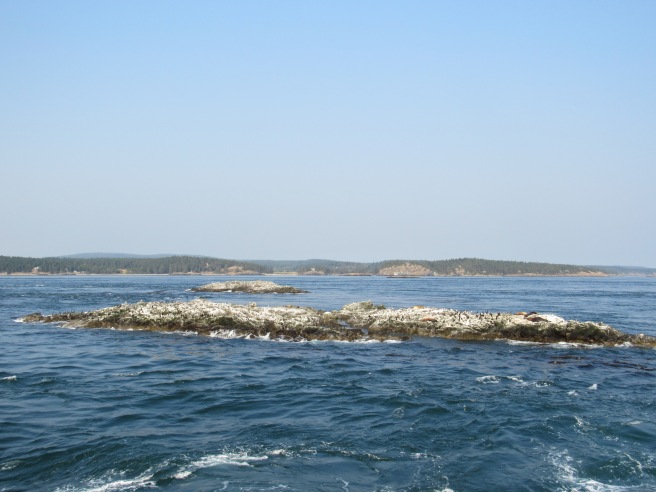 As well as this, more whales! Or possibly the same whales coming to eat the fur seals, it was hard to tell.

Whatever the case these whales were definitely more lively than the ones we’d seen before. You can see the whale above blowing water, plus one of them treated us to some breaching! This is where the whales jump out of the water nose first, for reasons that are not at all clear to me. Here he is just leaving the water…

At which point I decided the two thousand photos that I had of whales/ empty ocean would be enough, and instead focused on shouting “DID YOU SEE THOSE WHALES??” at literally anyone who came close to me.