Sorry for the delay since the last post, we were having too much fun in Seattle to keep up with blogging so ended up leaving you hanging. That is about to be rectified though with a flurry of new blogs, and no more than half of my 3,000 holiday pictures… promise!

So, back to Seattle and on to day two where we started our day by visiting the famous Aquarium. The Seattle Aquarium is at Pier 59 on the waterfront, and integrates the waterfront into it’s displays. It’s famous for it’s great exhibits, as well as being a big promoter of Marine conservation.

One of the first exhibits that we saw were the frankly amazing Giant Pacific Octopuses (Octopi?), which were charmingly named Taco and Umbrella. Umbrella was pretty standard as far as octopuses go, whereas Taco was a complete lunatic.

Apparently he’d only been in the aquarium for a few days, and he spend the whole time we were watching him shooting around his tank like a maniac.

To start with he fired himself at some children who were watching, and actually managed to get a few tentacles out of the water at one point:

After that he fired himself around the tank a little more, then stopped to take a break that mostly involved puffing himself up and changing colours:

He stayed still for almost a minute changing from white to red and back again, before resuming his shooting around. Apparently the Octopuses will turn white or mottled when they’re resting or trying to blend into the rocks, getting more red the more engaged they are. I’m not sure what it means when they turn spiky, but that’s what Taco did next:

The Octopuses are one of the first things that you come to in the aquarium, but we probably spend a good half hour standing watching him. Finally we managed to drag ourselves away to the other exhibits, which were made up of slightly calmer animals.

They had a great group of Harbor seals and Fur Seals, both of which had wonderful views out to Puget Sound from their cages. A lot of the aquarium is actually outside connected by piers, so it’s very scenic throughout.

You can see that the walkway in the picture above is cement, as is most of the aquarium. It gives the whole thing a really nice industrial feel, which I loved!

About halfway around the aquarium we reached what might be the most famous exhibit – the Sea Otters! I confess that I lost my mind a little bit when I saw them, they are so damn cute. Many children were pushed out of the way, and many pictures were taken. We were lucky enough to get a Dad Top Tip from my father, which is to visit the aquarium early in the morning – since the animals hadn’t seen much happening overnight they were pretty interested in the first guests of the day. Here is a Sea Otter checking us out:

They’re actually bigger than I thought they’d be, they were about four feet in length including the tails so about twice the size of the River Otters that you usually see in aquariums. When they weren’t checking us out they spend some time lying on their backs and relaxing, which was so freaking cute: 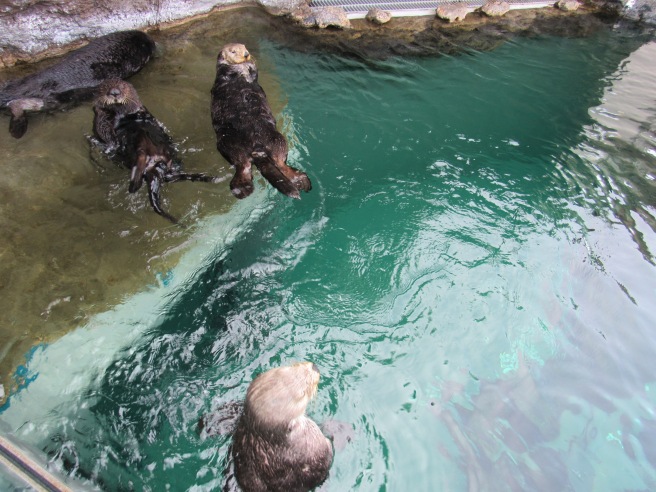 After those guys we moved on to the River Otters, who were considerably harder to photograph! One stopped and looked at me for a minute just to tease me, and then shot off just as I was taking the picture…

Still,, at least I tried!

After spending another hour wandering around, at least half of which was devoted to spending more time watching Taco, we headed out to walk a little further along the waterfront. The whole area is very pretty, and actually not that dissimilar to an English waterfront:

Rob, Uncle Chris and I then spend some time playing the various games that were along the front while the rest of the family stopped off for cake. This included a very energetic game of table tennis, hindered only slightly by the damaged ping ping ball: 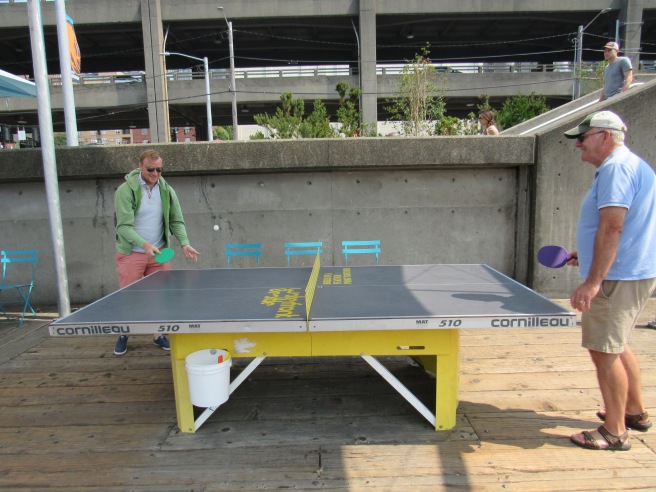 We also checked out the arcade and had a great time at the only-slightly-terrifying shooting gallery:

We all got high scores despite the fact that the bear thing is clearly haunted, and at one point moved to look directly at Rob…

Eventually we regrouped, and got ready for the treat that Auntie Mary had planned for us for the afternoon – a food tour of Pike Place Market! We’re all pretty keen on our food, and the tour looked frankly awesome.

The meeting place for the tour was one of the famous features of Pike Place Market – the Gum Wall! Yes, this is exactly what it sounds like:

The Gum Wall has gradually built up over time – the wall is outside the Market Theater, and so people waiting in line used to take their gum out, place it on the wall and stick a coin to it. This apparently was quite pretty, but had the problem that people kept sneaking in and stealing all the coins… This is how it ended up just being a gum wall, which was voted the second germiest tourist attraction in 2009! We were told that the theater workers have tried a few times to take the gum down, but it always gets replaced quite quickly. We were not willing to touch the wall in order to add gum of our own, but we did see a few people who were brave/ foolish enough!

After this not very appetising start to the food tour, our excellent host Danny showed us around the area. We tried an excellent mix of food, highlights of which were the freshly cooked donuts, the Filipino longganisa sausage, the Greek yogurt from Ellanos, the Chukka Cherries and Etta’s Crab Cakes. These were just a few of many tasty samples though, and after two hours we were starting to struggle! We also learned more about the ethos behind the farmers market. The idea is to get food directly from the producers, and that the food follow the ‘FLOSS’ guidelines – Fresh, Local, Organic, Seasonal and Sustainable.

Here we are eagerly waiting for our award winning Clam Chowder sample, spoons in hand!

At the end of all this excitement we managed to fit in a tiny bit of dinner, then home for movies and early bedtimes!