After our NASA excitement we spend the second part of Friday visiting the nearby Cocoa Beach! This is just down the road from Cape Canaveral and is actually a city, but the city of course does have a lot of fabulous beach space. We drove around looking at the sights before finding a little road out to the sea, and off we went 🙂

Since we were in one of the less crowded areas of Cocoa Beach we had lots of room, and there were plenty of little birds and lizards around to keep us company. There was also a nice network of boardwalks spreading through the jungle area, but more on those later!

Shortly after setting down on cocoa beach and soaking up some sun Rob of course decided to get in the sea despite the cold temperatures and various flags outside the lifeguard hut. The flags were red and purple but people were swimming around so we assumed all was well, although we later learned that these represent ‘extreme danger’ and ‘dangerous wildlife’, respectively. Still, no harm no foul! Rob even dragged Cody in with him, resulting in the delightful series of pictures below. I definitely recommend taking the time to zoom in on their faces, where faces are even visible amongst the waves!

After taking plenty of pictures of that excitement, I also spend some time looking around at the little birds. My favorite were the Sandpipers running in and out of the waves all along the coast:

We also saw an Osprey and plenty of Brown Pelicans! Sadly, both swooped down overhead and then tanked away, so I didn’t manage to get any pictures ☹ There should be more opportunities soon though, so hang in there!

After soaking up plenty of sun I spend some time walking around the boardwalks through the jungle. Here they had lots of lizards hiding in cactuses, which was just too cute…

There were also plenty of secluded sitting areas, and great lighting! I spent lots of time taking pictures of these, but will spare you from having to look at too many 😊 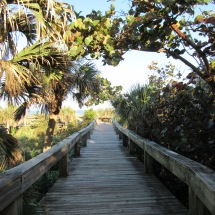 Finally after all this relaxing we sleepily made our way back to the car to head back to the hotel. Quick showers all around to wake us up a little, and then off to dinner!

The area where we’re staying is near the massive and beautiful Orange County Conference Center:

So the whole area is pretty built up – lots of shops and generic fast food places. We wanted something a little nicer, so wandered a little more towards Orlando and ended up having dinner at a tasty Lebanese place. The food was pretty standard chicken shawarma, but the drink was outstanding! I had something that was a lot like a lassi – it was a mix of strawberry and mango juice, and contained whole fruit slices plus a dollop of cream and some crushed pistachios. I was in heaven:

Hydrated and sated we headed off to bed, very happy with our first day and a half in Orlando! Tomorrow we head a little further north, and see some of the state parks…