A short update on our weekend so far! This Saturday the weather is extremely beautiful here in Fort Collins, it’s 85°F (29.5°C) with bright sunshine and blue skies, so much fun was had!

Rob’s dubious idea of fun was a grueling 28.5km bike ride around the reservoir, with an alarmingly fast top speed of 35 mph on the steep downhill bits. It does not look like an easy cycle:

But he said he had a very good time, and saw a horse, a donkey, and some people tubing down to Poudre river! We have not yet tried tubing, but are very keen to do so since it looks like a lot of fun:

I decided not to sacrifice my body to bike riding, and luckily got an offer to go a Medieval Fair with my friends Jeny & Linda from work! This sounded like a lot of fun, and something I have never done before, so off we went.

Unlike most fairs there was a very relaxed approach to clothing, so it didn’t matter that we weren’t dressed in costume. A few people did make the effort and were in full medieval dress, but good lord did they look warm:

Also unlike most fairs, this took place just next to the beautiful ‘Devil’s Backbone’ in Loveland, which is a really pretty geological feature. There are tall rocks which rise up along a naturally occuring hill, making the whole thing look like a monster spine:

The fair itself was really lovely. It was mostly small stalls in tents with people selling homemade goods, and there was lots of great stuff. I bought a wooden painting of the Colorado flag to hang up, and the others got some great jewellery.

As well as the cute shops they had lots of performances, including Belly Dancing: 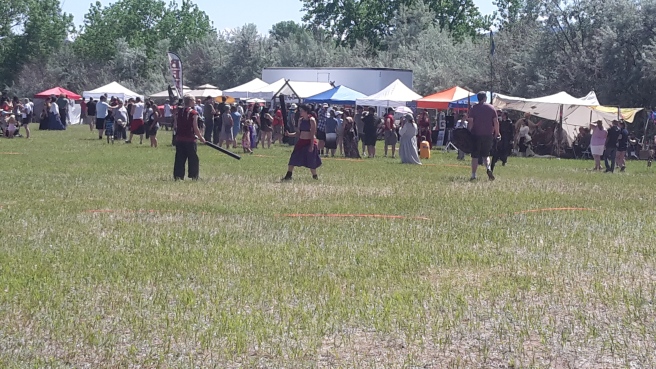 We were pretty tempted by the sword fighting, but it was far too hot to be leaping around fighting. We had a glass of Mead instead 🙂

Afterwards we went and got ice cream to bring our body temperatures after our baking in the sun, and agreed to do it again soon!

Tomorrow we are going to be day tripping across to Nebraska, so we hope to have more exciting pictures for you tomorrow 🙂